How to grow Pleurotus eryngii – cardoncello?

Pleurotus eryngii is a popular edible mushroom native to Mediterranean regions of Europe, the Middle East and North Africa.

It is a parasite on the weakened roots of Eryngium and Carduus species, hence the Latin name Pleurotus eryngii, and the Italian name ‘Cardoncello’.

Being highly appreciated by the Italians, this tasty mushroom has always been searched for in the wild, to be sold at a good price on the local market. Hence it is not surprising that the first cultivation system has been developed in the heel of the Italian boot.

Given that Pleurotus eryngii has a slow growing mycelium, it was found impossible to use the same production method as for Pleurotus ostreatus. According to this method a straw-based substrate is pasteurized in bulk, cooled and inoculated in the same bulk, and finally filled into bags. Thanks to its aggressive character the Blue Oyster-mycelium is able to invade the substrate before other microorganisms can take over, at least if strict rules of hygiene are followed.

Yet the hygiene level of such a bulk system is not sufficient to successfully incubate straw substrate with Pleurotus eryngii: the mycelium is simply too slow and weak to dominate airborne microorganisms, which are mixed into the substrate during cooling and inoculation. For that reason the Italians decided to fill the straw-based substrates into bags, which were then pasteurised, cooled and individually inoculated. The fully incubated bags were placed side by side under a layer of soil, so as to obtain mushrooms with a natural aspect, i.e. with a large cap and a small foot.

In the nineties the idea was picked up by the Japanese, who turned it into a more cost- effective industrial method. The basic principle is the use of sawdust-based substrates, which are filled, pasteurized and inoculated, incubated and fruited in one and the same bottle. The Koreans and the Chinese further automated the production method, and installed vast production areas where many tons of mushrooms are daily picked. The fully automated lines perform automatic mixing, filling, pasteurisation, inoculation, growing and picking, realizing a high output at a low labour cost.

Especially in the Far East, where mushrooms play an important role in the kitchen, bottle- cultivation, especially of Pleurotus eryngii, has become a multibillion dollar business. Standardization being a key issue in this production method, everything happens under strictly controlled climatic conditions. The fruiting rooms are kept at constant temperature, humidity and CO2- level. While trimming all primordia except 3 or 4, regularly shaped mushrooms are produced, with a small cap on top of a large swollen stem. Such mushrooms are easy to pick and pack and have a long shelf life. Therefore they are suitable for export all over the world.

In Western Europe and the US, the market of Pleurotus eryngii is only slowly developing, hence an investment in such fully automated growing system is not yet profitable. Depending on the region and on the preference of the grower, different production systems have been put into place.

The substrate composition may vary, but consists basically of a mixture of sawdust and more aerated materials like straw, maize stalks or cotton seed hulls, enriched with nitrogen- rich additives. A C/N ratio of 30-40 and a moisture content around 70% are optimal.

Bottles are barely used in Western Europe, but artificial logs – substrates – are produced in all sorts of bags and shapes. Substrate portions of 1 to 4 kg are filled into bags which are provided with different filter systems for gas exchange.

Pleurotus eryngii is very susceptible to bacterial infections, mainly Pseudomonas tolaasii, which turns the mushrooms brown and sticky. Very quickly this leads to a vicious circle of infections, which can be prevented by picking only one flush. On condition that the blocks are left in incubation for a few extra weeks, an average yield of 20% mushrooms in only one flush can be expected. Most growers go for more security, and discard the substrates immediately after picking.

Prices for Pleurotus eryngii are very much under pressure in Europe, due to the cheaply imported Korean products. To defy this competition, a large part of the Pleurotus eryngii in Europe is cultivated under an organic label, in which case better prices are paid by the wholesalers.

PrevHow to grow mushrooms outdoors?
The truth about Chaga Mushrooms: do they actually kill their host tree?Next

We are a biotechnology company that produces your mycelium at different stages of development: mother cultures, mother spawn and spawn. We can also assist you with consultancy and training, or help you develop your products for the mushroom or biocontrol market. Read more 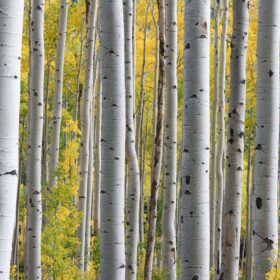 The truth about Chaga Mushrooms: do they actually kill their host tree? 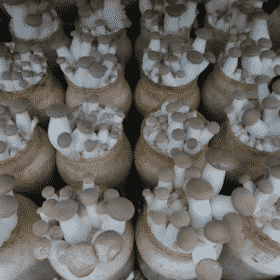 How to grow Pleurotus eryngii – cardoncello? 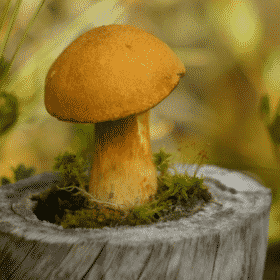 How to grow mushrooms outdoors?

Receive updates about our trainings, mushroom spawn and research innovations.

Proud organisers of the WoodFungi Conference

This website uses cookies to improve your experience while you navigate through the website. Out of these cookies, the cookies that are categorized as necessary are stored on your browser as they are essential for the working of basic functionalities of the website. We also use third-party cookies that help us analyze and understand how you use this website. These cookies will be stored in your browser only with your consent. You also have the option to opt-out of these cookies. But opting out of some of these cookies may have an effect on your browsing experience.
Necessary Always Enabled
Necessary cookies are absolutely essential for the website to function properly. This category only includes cookies that ensures basic functionalities and security features of the website. These cookies do not store any personal information.
Non-necessary
Any cookies that may not be particularly necessary for the website to function and is used specifically to collect user personal data via analytics, ads, other embedded contents are termed as non-necessary cookies. It is mandatory to procure user consent prior to running these cookies on your website.
SAVE & ACCEPT

Please wait while you are redirected to the right page...